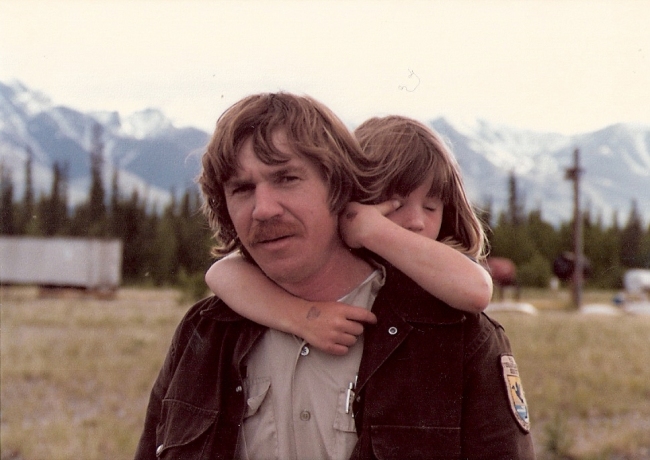 My dad survived not only that night in the hospital but he went on to become cancer free that year. He had a bone marrow transplant and although I know he never felt 100% during that year he was able to go back to work and do one of the things he loved most – conserving land. We had moved to New Hampshire for him to establish a new refuge. So while he was recovering from cancer that is what he did. He worked to bring into being Lake Umbagog National Wildlife Refuge.

In the meantime, at the wish of our dad, my brother and I returned to school to continue on with life. He wouldn’t have it any other way. We needed to live and do what we were supposed to do. After all, that was what he was doing right? I returned to the University of Idaho and for the next year I attended school and then continued to live there during the summer to work at a local coffee house. I don’t recall any signs of anxiety at the time. I was young and in school and the treatment for cancer had worked. My dad was doing better and that was good enough for me.

The fall semester came and went and so did Christmas. I hadn’t quite started in on my spring semester when my mom called. My dad had been in for his routine check-up. He had developed what is known as myelodysplastic syndrome. It had to be treated exactly like leukemia. I could hear the wavering strength in my mom’s voice. She confided that when my dad got the news she could see the discouragement on his face. Later I wondered if what she saw was more resignation. He knew that his time here on earth was short.

This time around family was tested to see if there was a match for his bone marrow. The first bone marrow transplant was actually cultured from his own cells to reduce chance of rejection. Everyone was tested and my dad’s sister Bev was a match. Not just any match, but a perfect match. She underwent the painful removal of the bone marrow and my dad underwent chemotherapy again to prepare his body to receive the new marrow. It came in beautifully. As the healthy cells grew and filled my dad with what we hoped to be life the rest of his body ravaged by toxic chemicals had simply had enough.

At the time of the transplant I was still in Idaho and had planned to be home over spring break for a visit which was in a couple of weeks. My plane ticket was already purchased and my boyfriend (who is now my husband) was going to travel with me to meet my dad. But when you are dealing with cancer it runs on its own time schedule.

Two weeks before I was supposed to go home I received a phone call from my mom. It was short and to the point. Your dad is doing worse. Get on the next available flight. He may not make it before you get here. I hung up the phone and hurriedly packed. The nearest airport was 80 miles away and I had a plane ticket to change. As my roommates surrounded me and helped me I got on the phone with the airport and attempted to change my ticket. The woman was less than helpful questioning why I had to change it and if I just waited another day the fee would be less, etc. until I finally shouted into the phone that I needed the next flight available because my dad was dying and I wanted to get there before he did. There was absolute silence on the other end of the phone. Hurriedly and with apologies she booked me the next flight out of Spokane. Like a whirlwind I was gone. So strange it was that I woke up with one thing in mind and found myself flying across the nation to New Hampshire.

I arrived in Boston around midnight and a close family friend drove me a couple hours up to Dartmouth Hitchcock Medical Center. By then it was around 2 o’clock in the morning. There were no cell phones back then or if there were I didn’t have one. I raced out of the vehicle leaving everything behind, found the oncology department, raced down the hall to the nurses station and quietly but quickly with a sigh of relief entered my dad’s room. He was still alive. There he lay on his bed the sickest I had ever seen him. He had no hair and his complexion was sallow yellow. His breathing was labored, but he was alive. I curled up on the extra bed against the wall next to him and fell fast asleep. In the morning as my eyes opened I saw he was awake so I shot up and brought my face close to his. In delirium he reached up and grabbed my face and with a big smile and child like voice full of joy he said, “Daddy’s little sweetheart.” It was the last thing my dad ever said to me.

2 thoughts on “In the Middle”